< Back to all blog articles 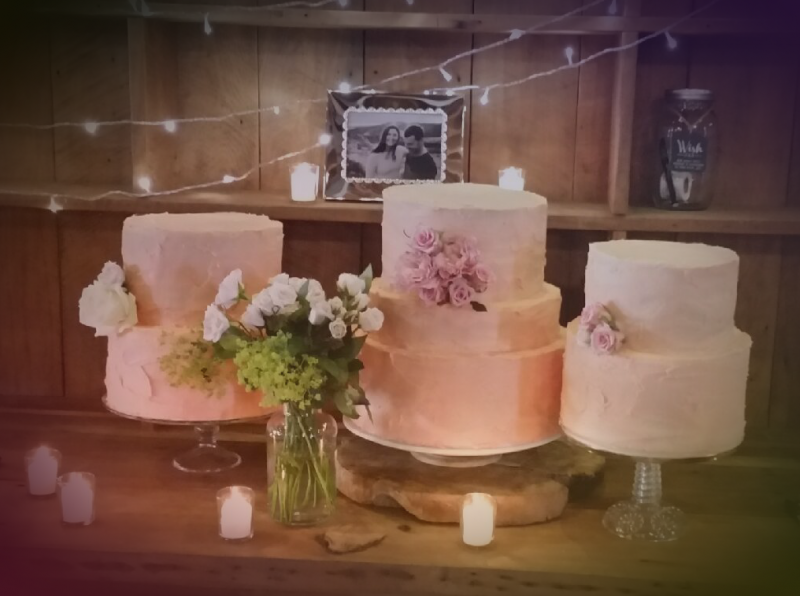 We have, in a moment of panic from a client, iced a couple of cake tins and pulled one of our Best Ever Chocolate cakes (worthy of the capital letters) out of the freezer when their own wedding cake supplier dropped the ball, literally.  En route from their baking kitchen to the van, the wedding cake took a tumble and ended in a heap on the ground.  There were tears, and not from the bride, as hours and hours of painstaking work became sparrow fodder.

For some people cakes are very important, they’re a secret family fruit cake recipe lovingly made by an aunt or a favourite cake from childhood.  Everyone stands to watch the bride & groom cut the cake together, symbolically representing their first joint act as husband and wife.  Traditionally, we always gave the sliced cake to the bridesmaids to pass around and it was offered to parents and grandparents first.  Fruit cake was for fertility, white icing a sign of virginity and purity and multiple layers a status symbol representing financial wealth.

These days however, the wedding cake has taken a bit of a back seat – the beautiful cake itself is still on display and the tradition of cutting it always included in the day.  But the serving and eating of the cake is largely at tea & coffee time and not a lot is eaten, often leaving the newlyweds with kilos of leftover cake.

Enter cake dummies.  Cake dummies are polystyrene layers that are iced as normal and look like another tier of an incredible cake but obviously, they’re not for eating.  With cake dummies you can be as extravagant as you like with your ideal wedding cake because you’re not paying for layers and layers of actual baked cake.  Just one layer need be real for the traditional cutting ceremony which can later be sliced and served to guests.

Double height cakes are a big wedding trend at the moment and can easily be achieved with cake dummies, as is a ‘cake sideboard’, a table with a couple of different cakes at different heights, candles and flowers.  Just last week we did a wedding cake sideboard with 13 different layers made into three different cakes and only the 3 top layers were actual cake.  Guests thought it looked incredible and when they were offered a piece of cake with tea & coffee, were none the wiser that the rest of the display was polystyrene.  The upshot was, the 13 layer cake would have costed in excess of $2,000.00 retail but was just a couple of hundred dollars instead.

Now that is literally, having your cake and eating it too.  Speaking of, why don’t we have that brilliant groom’s cake tradition in New Zealand a la ‘Steel Magnolia’s’?.  I desperately tried to get my husband to have a red velvet armadillo but he refused to play the game.  Still married him though, lucky buggar.